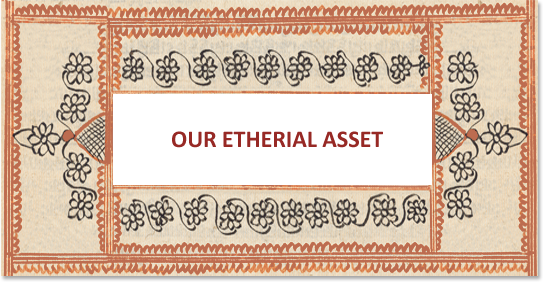 The wealth of our life
Is the Son of Dharma
Who brings the dead to Life
As Lord Ghanshyam in person
Relieves the fear of re-birth
When we look at Him with love
He washes away ugly thoughts
That's why Premanand
Keeps His beauty in his heart.

We may ask someone : 'Brother, how much is your wealth?

He would reply : 'May be rupees fifty thousand, ten lakhs, two crores, apart from so many bungalows, so many cars etc. But in most of the instances such wealth may lead to murders, bungling and scams. Ultimately it is sure to bring discount because such wealth is not permanent. When a person's body fuses into the five fundamental elements, all the wealth remains where it is and the soul of the person, who had accumulated such wealth may go away elsewhere. If a person is a billionaire he cannot sleep soundly at night because of the thoughts of strategies for escaping from the dragnet of income-tax department He may become a victim of a series of diseases. He wouldn't be able to enjoy his own wealth! So Muktanand Swami Says :
Uneasy lie the heads of the kings and the poor,

The rich are unhappy with disorders.

Ignorance causes the plight all over the world,

In the darkness of illusions and of attachments.

The man of letters reaches the light divine

Happy are the saints in this world of sufferings.

A poor person is unhappy because he has no money, while a rich person is unhappy because he has much more money. If a person thinks (wisely) with discretion, he realizes that the true wealth of his life is God-realization. This is why Premanand Swami declares : 'The wealth of our life is the Son of Dharma.' The wealth of our life must be Shree Harikrishna Maharaj. If we count our wealth before someone, finally we must say : 'Above all, my true wealth is God Supreme-Shree Harikrishna Maharaj. The wealth in terms of money if lost, can be regained; but God leads us to spiritual liberation. If that is lost, all is lost.

Innumerable people live in the world but they live as if dead because they do not have the spiritual spark. Just as the herb of nectar can bring the dead to life, a person becomes immortal if all his thoughts become steady and fixed in God. The most powerful man of the world constantly decides not to die and so always makes efforts for the same and lives in an atmosphere of death-fear. But if he understands the mystery and worships God, Who is the divine nectar and removes the fear of re-birth, he would become fearless.

Thus the form of God leads a man to immortality, making him fearless and bestows everlasting bliss upon him. So keep your worldly life confined to your senses and internal (fourfold) senses, but at heart love the form of God alone. By doing this, the path of devotion becomes smooth, easy and direct.

A woman has a child , playing with many children of the same locality. These children may be more beautiful than her child but that mother would love utmost only her own child and she rears the child with great love, care and caution. This mother knows that other children may appear more handsome but ultimately her own son will support her in old age.

Similarly, as long as we are within the frontiers of ignorance, we may have attraction for apparently pleasant sensual objects of pleasure but the final bliss is bestowed upon us by God alone. That is why we should love none but God. Call on the form of God with great love after removing desires for objects of pleasure.

There is difference between a mother calling her own child and somebody else's child. She has constant love for her own child. Similarly when we meditate upon the from God, we should do the same as if we are looking at our dearest object in the universe.

The man of letters, reaches the light divine

Which is the true divine knowledge?

The answer is : Concentration of mental modifications in the divine form of God.

That is why Premanand Swami keeps His beauty in his heart.

Keeping the  beauty in the heart means keeping in heart the beauty of the Form of Shree Harikrishna Maharaj, installed by Shree Hari in Shree Swaminarayan Temple at Vadtal. That Form is our true asset. So we should meditate upon Him in our soul and develop the conviction that none in the universe is as beautiful and as dynamic as He is. Then only the technique of meditation upon Shree Harikrishna Maharaj would become easy for us all.