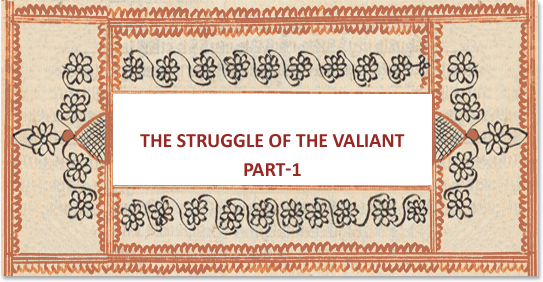 THE STRUGGLE OF THE VALIANT

“The War that an ascetic wages

Is more arduous than the warrior’s;

Only the bravest of the ascetics dare to fight

The inclinations of the mind, says Muktanand."

Mind works as a store-keeper of our “Subtle Self.”  The mind is full of good and bad desires.  Mind binds the man in eternal bonds; mind can also free him and lead him to Moksha, the final redemption.  It all depends on how one uses one’s power over one’s mind.

In the eyes of the world the person or nation which wins is considered valiant.  But that is superficial bravery.  The ultimate bravery consists in overpowering one’s own mind and in leading it on to the path of spiritual progress.

This is a little difficult idea to understand for a common man.  Very few understand the nature of this struggle and still fewer go on practising this and walk on the thorny path of self-realization.  Many persons think that they can, if necessary, control the activities of the mind and keep it away from struggling.  So their life is ordinary routine life.  They are subjected to temptations.  If one advises them to follow the spiritual path they would answer that they do all they need to do mentally.  But they don’t understand how they are cheated by their own mind.  Would they say that they would ‘eat with their mind.’  It is not the mind that eats.  The mind works through the agency of the body.   The mind needs the help of senses located in the ‘gross self’ – body to do what it pleases.  Thus, it is necessary to enroll the body in devotion; only then will the mind be attached to it.  But a common man gets engrossed in the objects of senses in this world and deviates from the path of spiritual progress.  Thus he ruins himself.

Does man want to destroy himself?  Does he want his own ruin?  No, it is only his gross ignorance that leads him to the path of his own destruction.  He brings his mind in the world filled with the impressions of good and bad deeds of his past births.  And he constantly goes on acquiring newer and newer objects in his mind.

Man’s mind is filled to the brim of worldly things

He acquired these as he passes in life

There is hardly lift any space in his least

For the Lord Divine to enter there

Suppose there is house that is well-designed.  All furniture items are placed in their proper places as they are needed.  It would be comfortable to live there.  But if the owner goes on buying hap-hazard items and goes on stacking them on an on, there would hardly be any space left even for the owner to live in that house.  Then how can he accommodate a guest – Shree Hari in this rag-and-bone Kabhadi shop of his heart?

We must always organize our house.  Our mind is our house.  We must put everything in order.  May be, one has to shoulder one’s responsibilities in domestic life and to that extent get involved in worldly affairs.  But one corner must always be kept sacrosanct for the Lord Shree Hari.  Of the twenty-four hours allowed to us, some specific time must be allotted to the prayer, where one may sit face-to-face in the Dhyan, meditation of Shree Hari.

Imagine a person taking on phone.  He goes on chatting with his friend at the other end.  Their talk is useless gossip.  All the while there is another call waiting for him.  Someone else wants to talk to him about the things of his interest.  But he cannot be reached.  He is engaged in the useless gossip, while the call waits for him.  Then the caller leaves the ‘phone, considering it ‘engaged.’  The Lord Shree Hari is always dialing us but have we time to take the call?  Our ‘phone is busy in the useless gossip.  Thus, the Lord who loves us and wants to communicate with us leaves the ‘phone and fells dejected that we have no time for Him!

The roots of worldly desires have gone down deep,

Efforts to uproot them with trick or force will hardly succeed.

And don’t blame the Lord Shree Hari for your fault

He is ready to help, but are you ready to receive Him?

The Lord Shree Hari is always ready to lift us up towards our bliss.  The fault lies in us.  The people of the world are “so full of worthless objects” in their heart that they have no leisure to hear His call.  Only those who come to know Him truly through His saints will be able to traverse the path of Bhakti, the way of Divine Love.

Thus, you are enjoined to free you mind at least for half an hour, from its preoccupations with the desires of the body and try meditation, chanting the Holy Name.  Then sometime the Divine Bell will ring and you would hear the Voice of Divine.  And your self will be tuned with the Supreme. That is the real battle of the Valiant.